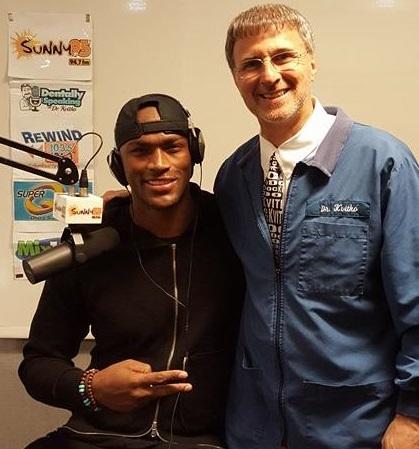 Exuding confidence, exemplifying talent, athleticism, stunning good looks and boasting an NFL background, Keith Carlos is currently a finalist and premiere cast member on America’s Next Top Model – Cycle 21 where he can be seen weekly on the CW channel. As a former wide receiver who lent his talent to the Philadelphia Eagles and the New York Giants, in 2013 Keith’s NFL career transitioned. In just a short period of time, Keith began making his indelible mark on the world of high fashion modeling. At just 26 years old, Keith, a native of Bridgeport, CT, has made astonishing accomplishments.

Keith has remained vigilant, resilient, and resolute to continue branding his name and image. Given this charge, Keith set his plan into motion to follow his NFL career as a high fashion supermodel. With this new initiative and ferocious ambition, Keith exploded onto the fashion scene and launched his modeling career when Krave Magazine hand selected him for its 2011 cover. Continuing his forward momentum and upward mobility, Keith landed the lead role in Day26s’ 2012 music video entitled Made Love Lately. Following this performance, Keith appeared on the nationally syndicated reality television show the Real Housewives of Atlanta; where he was cast in a photo shoot alongside one of the show’s main cast members – Kenya Moore. Highlighting the successful launch of his modeling career, Keith’s uniquely handsome, yet rugged good looks were then recognized by Essence Magazine in its 2013 issue as an “Unforgettable Face!”

Statuesque, Keith stands at six feet two inches in height and is a well defined 185 lbs. With a chiseled physique and strong features, Keith is determined to shed the inference between himself and supermodel Tyson Beckford. He plans to carve out his own unique niche in the modeling industry. Demonstrating a uniqueness all his own and as previously mentioned, Keith is a finalist and cast member on supermodel Tyra Banks’ franchise, America’s Next Top Model (ANTM) - Cycle 21 Guys and Girls. Aired globally, and debuted weekly, Keith’s charismatic personality, infectious smile, and relentless drive for modeling perfection has now been introduced to the global fashion community.

As Keith continues to strategically advance his career, he has targeted major media publications such as GQ, Vogue, and Esquire magazines. To frame his illustrious career as a former NFL player, model and actor, Keith aspires to become heavily entrenched in philanthropic endeavors that focus on inspiring disadvantaged youth.